There’s so many webcam manufacturers it may seem impossible to find the right one. Most are plagued with buggy firmware or poor optics. After two years of continuous use, I happy to report that two StarDot NetCam MPs have performed flawlessly as Sarasota’s premier webcams. Here’s the view from Downtown Sarasota: 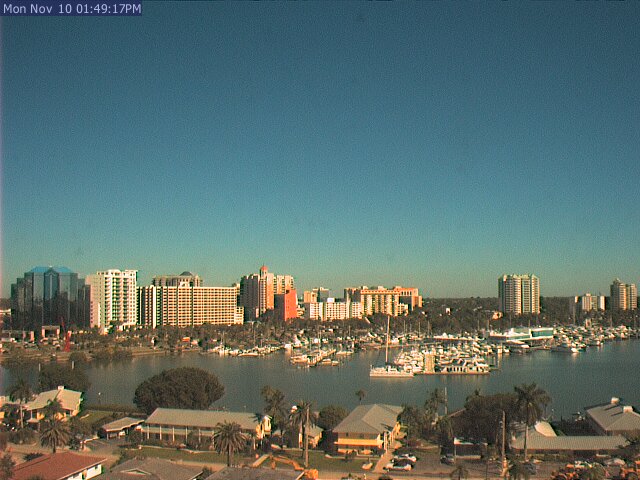 This is only at 640×480 resolution. The NetCam MP can produce images at 1280 x 960 resolution (1.3MP). The optics are definitely a strong point for StarDot. That’s because they’ve been designing digital camera technology since 1993. In fact the NetCam MP was the first true webcam to offer image resolutions greater than 1 megapixel. It boasts a 1/2″ CCD sensor, not a CMOS sensor like most webcams.

The best part is that the high resolution webcam comes complete with a built-in webserver and software features that can be controlled remotely. The built-in webserver can serve live video to multiple users. However in the case, to preserve bandwidth, the NetCams were set to upload 640×480 images to an off-site webserver for high traffic access. Each NetCam was able to upload a new image about once every 4 seconds. This is possible because of the built-in ftp functions. Since the NetCams have a built-in web server, no computer is necessary to make these cameras work.

The internet connection was 10/2Mbps Fios Internet service provided by Verizon. It was a very reliable high speed service that worked perfectly for this netcam install. One connection was shared between two cameras.

These NetCams have been used for over two years, and have never locked up or required a reset. Since 2006, StarDot has added additional webcams to their lineup, including the 3 megapixel NetCam XL. StarDot also offers DVR solutions for security monitoring, etc. For more information on StarDot NetCam products, please visit Stardot.

Unfortunately, due to lack of funding, the Sarasota webcams are no longer online. In the meantime, there are few other webcam providers in sarasota: